Kartik Aaryan Looks Unrecognizable In This Throwback PIC With Sagarika Ghatge, Recalls Time When He Asked Her To Say Hi To SRK


New Delhi: Bollywood actor Kartik Aaryan, who was last seen in ‘Love Aaj Kal 2’ opposite Sara Ali Khan, went down the memory lane and shared a throwback picture with actress Sagarika Ghagte on Instagram. The ‘Pati Patni Aur Woh’ actor recalled the time when he asked the ‘Chak De India’ actress to convey a message to her co-star Shah Rukh Khan. Sagarika played the role of hockey player Preeti Sabharwal in ‘Chak De India’, which featured SRK in the role of coach Kabir Khan.

Sagarika Ghatge dropped a comment on the post. She wrote, “Omg this took me back in time and what a great marathon you are having since you jumped that barricade.” Bhumi Pednekar and Arushi Sharma also commented on the throwback photo. 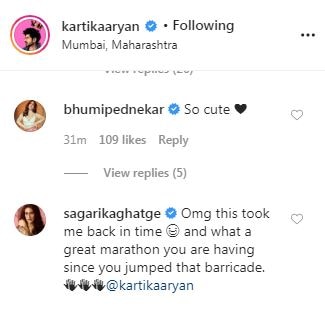 Kartik Aaryan made his Hindi cinema debut with ‘Pyaar Ka Punchnama’ in 2011. On the professional front, the ‘Luka Chuppi’ actor has a couple of exciting projects in his kitty including ‘Dostana 2’ and ‘Bhool Bhulaiyaa 2’. He has emerged as one of the most sought after actors in Bollywood post the success of ‘Sonu Ke Titu Ki Sweety’, which raked in big moolah at the box office.

Sonam Kapoor on quarantining with husband Anand Ahuja: ‘We don’t actually see each other that much’ – bollywood

Rangoli Chandel thanks Kangana Ranaut on Guru Purnima: ‘You taught me how to be a person worth living on this planet’ – bollywood