Air India Express flight IX 1344 operated by B737 aircraft from Dubai to Calicut with 191 passengers crashed after overshooting the runway and going into the valley.

Here are the live updates

11, including the pilot, killed

Official sources added that 11 people, including the pilot, were killed in the Air India Express flight accident at Karipur on Friday.

My thoughts are with those who lost their loved ones, says Modi

In his tweet, Prime Minister Narendra Modi says “Pained by the plane accident in Kozhikode. My thoughts are with those who lost their loved ones. May the injured recover at the earliest. Spoke to Kerala CM Pinarayi Vijayan ji regarding the situation. Authorities are at the spot, providing all assistance to the affected.”

At least 17 persons, including children, who were injured in the Air India Express mishap in the Calicut International Airport were admitted to the Aster MIMS Hospital, Kozhikode, by around 9.30 p.m.

Four of them were in a very critical state. District Medical Officers from Kozhikode and Malappuram districts and medical teams from various private and government hospitals were asked to look into the emergency medical care requirements.

The Kozhikode district administration quickly responded to the emergency call for help to rescue the injured passengers on board the Air India Express flight which met with the accident on Friday night.  About 24 ambulances from various parts of the district were sent to the accident spot in minutes after receiving the distress call.

Fire and rescue Service units from various stations in Kozhikode district too rushed to the spot soon after the incident. For the smooth rescue operations, the police rose to the occasion and cleared the road traffic for the speedy movement of ambulances. Senior police officers too reached the spot for supporting the rescue workers.

Kozhikode District Collector Seeram Sambasiva Rao who is also the chairman of the   District-level Disaster Management Authority reached the accident spot to coordinate the rescue operations along with the Malappuam district administration. The injured passengers were taken to various private hospitals in Kozhikode using the Airport taxi service.

Intensive Care Units of Kozhikode Medical College Hospital and the Government General Hospital too were prepared ready to treat the injured. A team of expert doctors assigned by the District Medical Office made special arrangements at the Government general hospital for admitting injured persons from the Airport.

The incident also triggered fear among many families whose relatives were on board the Air India flight. There were many of them waiting at the airport to greet their dear and near ones on Friday evening. A control room was also opened at the Karipur International Airport to exchange information on passengers (0483-2719493).

In his tweet, Union Home Minister Amit Shah says “Distressed to learn about the tragic accident of Air India Express aircraft in Kozhikode, Kerala.
Have instructed NDRF to reach the site at the earliest and assist with the rescue operations.”

Kerala Chief Minister Pinarayi Vijayan said police and fire force personnel have been directed to take all measures for rescue and relief operations.

There are 174 passengers, 10 Infants , 2 Pilots and 5 cabin Crew on board the aircraft.

As per the initial reports rescue operations are on and passengers are being taken to hospital for medical care. 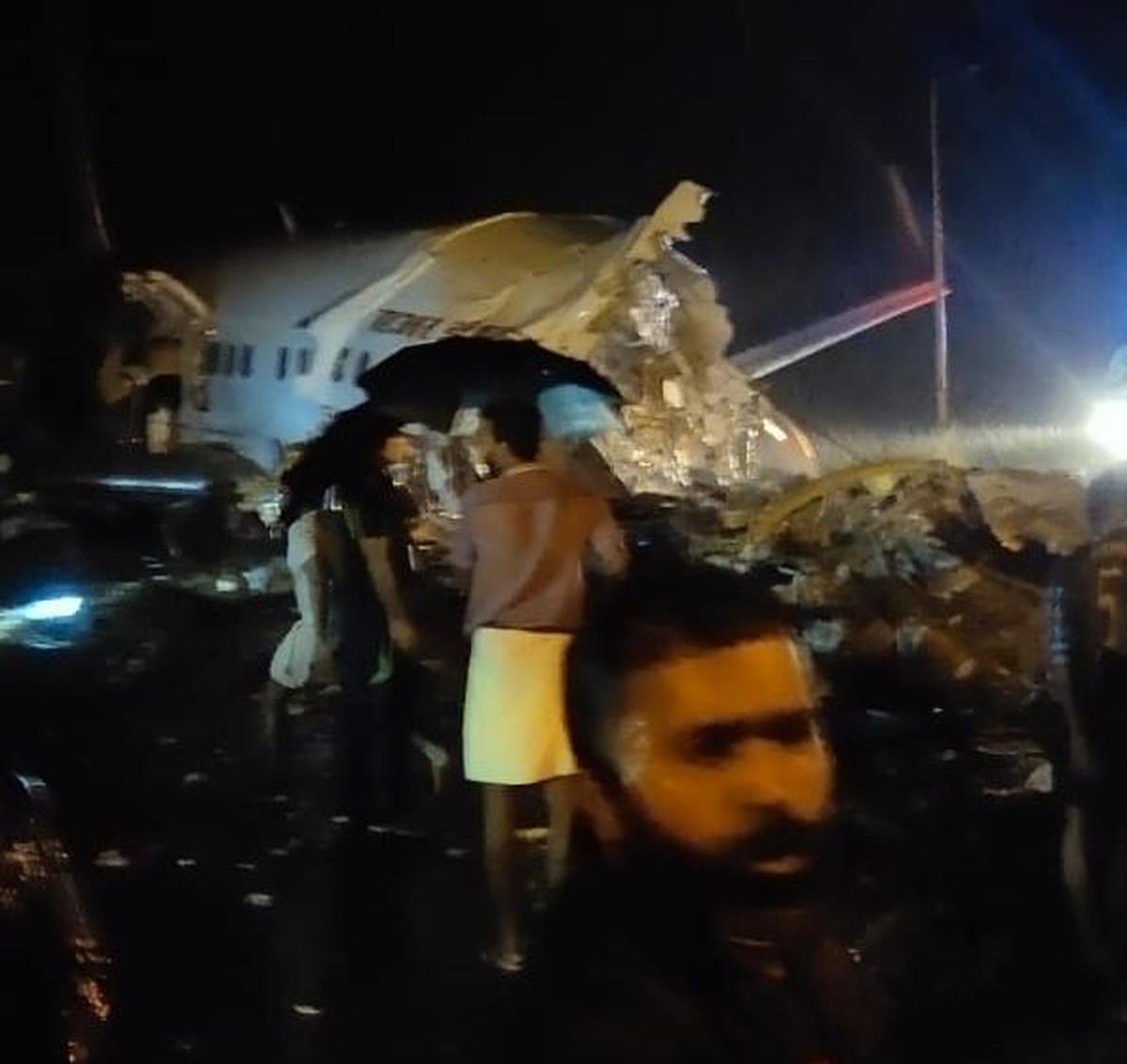 An Air India Express flight from Dubai crashed while landing at Kozhikode International Airport, Karipur, on August 7 evening. According to airport sources, the flight skidded off the rain-soaked tabletop runway while landing at around 7.45 p.m., and fell into a trench more than 25 ft deep. The fuselage broke into two.

There were 180-odd people, including crew members, on board the aircraft. The injured passengers were shifted to hospitals at Kozhikode, Kondotty and Malappuram.

The airport was closed following the accident.

Congress leader Rahul Gandhi said “I’m shocked to hear about the crash landing of an Air India Express flight, coming from Dubai, at Kozhikode, Kerala. While information is awaited from the authorities on casualties and injuries to the passengers, I pray that all the passengers have survived this terrible ordeal. My thoughts are with the crew, the passengers and their families and friends at this time.”

In his tweet, Congress leader Shashi Tharoor says “Tragic day for Kerala. First the deaths in Munnar & now this: I hear both pilots have died. Hope rescue efforts will succeed in saving all the passengers.”

MeitY in process of amending IT rules for intermediaries to make them more accountable: Sanjay Dhotre