‘DOTS’ is right on the dot, with its story of 10 emotionally isolated people

DOTS, Singapore-based filmmaker Shilpa Krishnan Shukla’s new movie, is perhaps the first feature film to be shot and released during the lockdown. Made virtually during the lockdown, it is about 10 emotionally vulnerable and isolated people connecting over an imaginary app called ‘DOTS’.

With the actors, director, cinematographer and technicians based in different places, the actors shot their parts themselves with the DOP watching over them, virtually. Filmmaker Shilpa Krishnan Shukla. Her film DOTS is perhaps the first film to be made and released during the COVID-19-induced lockdown
| Photo Credit:
special arrangement

Excerpts from an email interview with Shilpa.

What were the challenges in making a film during the lockdown?

Definitely doing everything remotely is challenging — the rehearsals, the tech runs, the shoots, the editing, the music, the sound, the DI (Digital intermediate), all of it was done remotely, that is virtually, and it was quite taxing. A lot of things would go wrong. For instance, while the actors were self-shooting on their phones, I would be on a Zoom call so that I could watch the performances. However, in some cases, we had severe network issues and I had to drop off. Nevertheless, the actors were well-prepared. Ultimately, it came out well. It was taxing for our virtual director of photography Mathew Jenif Joseph to get the actors to set the right frames with the best lighting, all with the equipment they had at home. Not everyone had tripods, so they were using everything from books to ladders to even mixers to hold the cameras!

Post-production was also difficult because every change in edit or sound or music or DI had to be rendered, uploaded from the respective locations. Then I had to download and comment, after which the technical team would rework. The process was a cycle. So yes, the challenges were many but I am happy with the outcome. 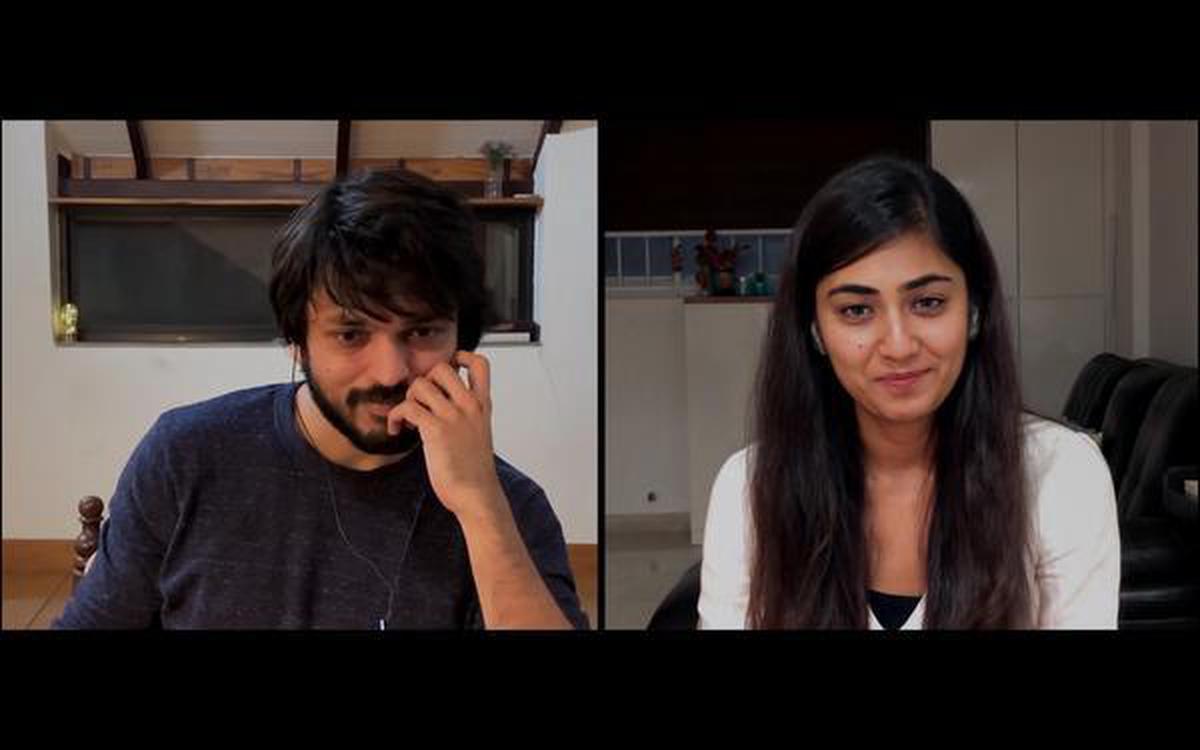 Aishwariya Kumar and Lalit Prabhakar in a still from Shilpa Krishnan Shukla’s film DOTS, which was made and released during the COVID-19 induced lockdown
| Photo Credit:
special arrangement

Why did you decide to make it now and not after the lockdown was eased?

The concept came to me because I had been wanting to make something with these actors from various parts of India. I had met them at film festivals or screenings of my films. We had spoken of collaborating, but it was always a distant opportunity because of the locations. So when the lockdown came about, I thought why not make a virtual film with all these actors.

The concept was conceived in early April. By the beginning of May, we had completed the shoot and on June 13, we had an online premiere for a select audience. So the film has been ready for a while.

What is the theme of the movie that tells the story of five couples?

It is based on a fictitious app called DOTS, which enables strangers to connect for a single two-hour conversation. What we see in the film is how five such pairs, 10 individuals, connect over the app, and have five very different conversations. The film touched on a range of topics, like dealing with boredom, loneliness, LGBTQ identities and some good, old romance.

Considering Kathaah, your previous film was also multi-lingual, what is the attraction in a multi-lingual script?

When I started on DOTS, I had not really planned it to be a multi-lingual feature. In fact, it originally started off as a web series and I was planning each segment to be released separately and the languages were simply based on the actors and the characters I had written for them. Later, when I converted it into a feature, I retained that multi-lingual aspect. Having said that, I love working with various languages because it is quite challenging to get the nuances right. I am not sure if there is any attraction in a multi-lingual film for the audience, but for me as a film-maker, I love the process.

Shishir Sharma and Suman Nagarkar in a still from Shilpa Krishnan Shukla’s film DOTS, which was made and released during the COVID-19 induced lockdown
| Photo Credit:
special arrangement

How was the cast finalised and the shooting done?

Although I had met most of these actors at various film festivals, those were brief meetings and while we had expressed a mutual interest in working together, nothing really materialised till now. So most of the scripts I wrote for DOTS were custom-written for the actors I wanted to work with. Prior to the shoot, I had five rehearsals with each pair and DOP Mathew had similar tech runs with each actor too. Once the frames were set and the actors were ready for the shoot, we got into a Zoom call — the two actors for each segment, Mathew and myself. The actors self-shot the films, while I reviewed their performances live.

At UNGA, Modi Assures Help to Nations Against Virus Crisis

Over 2.5L kids in childcare homes to return to families | India News