Eight Opposition Rajya Sabha MPs, who were suspended by the House on Monday, have begun an indefinite sit-in protest within Parliament, even as the 15 non-NDA parties have appealed to President Ram Nath Kovind not to give assent to the two farm Bills passed in the Upper House on Sunday.

The Opposition leaders will be marching to the President’s House on Tuesday.

The Parliament, which was initially scheduled to end on October 1, will wind up on September 23 taking into account the increasing number of COVID-19 cases.

Here are the latest updates:

A. Vijayakumar of AIADMK supports the Bill, says the government should allow needy people to make withdrawals when they need for any genuine reasons.

Dr. Amar Patnaik of BJD congratulates the Finance Minister on the Bill. Quis custodiet ipsos custodes or who will guard the guardians, he asks, raising concerns about the RBI’s supervision of banks. “What is the accountability of the regulatory power it wenjoys? Is it going to be over stressed?”

Banking is in the Union List, while the Cooperatives are in the State List, says Ram Chandra Prasad Singh of JD(U). With the RBI supervising the cooperative banks, their management will be bettered, which so far were under the State, he says.

The House begins discussion on the Bill.

BJP MP Ashwini Vaishnaw, congratulating Deputy Chairman Harivansh on his “non-violent response to violent actions”, says this Bill has a “human angle” to it.

He says when the promoters of Yes Bank tried to swindle the hard-earned incomes of people, the government took quick action and a reconstruction plan was formulated. This plan was applauded the world-over, he says. “Examples of PMC Bank and Yes Bank shows the importance and requirement of this Bill.”

Cooperative structure of ‘one share, one vote’ is not being changes, he says. He also dispels apprehensions on cooperative federalism being compromised.

Minister of State for Consumer Affairs Danve Raosaheb Dadarao says the ordinance was brought in, in the midst of the lockdown so farmers had a way of selling their crops.

The Minister says the Bill is in the interest of farmers and consumers.

The power to regulate the supply by the central government is very narrow, Vijaisai Reddy says, seeking clarification from the Minister. He asks that the government show data to show the measures taken against hoarders,because this is the reason the Bill is being introduced.

The Bill has good intentions but could have implementation problems, Mr. Patnaik says.

Kanakamedala Ravindra Kumar of TDP says the Bill throuws up an issue of cooperative federalism. Agriculture is in the State List and hence the Centre should tread carefully on this sensitive issue, he says.

Deputy chairman calls on Binoy Viswam, MV Shreyams Kumar, KC Venugopal and Digvijaya Singh to move their resolution against the Essential Commodities (Amendment) Ordinance, 2020. The members are not present.

S.R. Balasubramoniyan of AIADMK says some decisive action is needed to check rise of food prices. He says Tamil Nadu’s PDS has historically been one worthy of imitation, adding that the model of Amma Canteens in T.N. is studied by various States. Surendra Singh Nagar, now in th Chair, asks the member to wrap up since his time is up.

What is the rationale for the stock limits that have been fixed, he asks. He suggests that the government remove the storage component from the ambit of the Bill.

Mr. Patnaik says he supports the Bill and adds that agriculture research is necessary. Market research is also necessary to ensure small and marginal farmers and share-croppers get the benefit of the value-chain transformation that would follow from the Bill, he says.

The Education Minister begins his reply to the debate

He thanks the members for their suggestions. He assures Kamakhya Prasad Tasa that the government is committed to ensuring good education in the northeast. He says it is the government’s aim is to take more institutions from India to the global education scene.

YSRCP MP V. Vijaisai Reddy supports the Bill, says the students suffered when it came to jobs due to the provisional certificates issued by the five institutes now being conferred national importance tag.

He asks the government to focus on the existing institutions of national importance as well.

The perception of IIITs need to change, he says. “IIITs are considered sub-par to IITs. Students go for IIITs as a second option. Standardisation of courses taught in IIIts could help bring them at the same standing as IITs,” he says.

JDU MP Ram Chandra Prasad Singh supports the Bill, welcomes the national importance tag for the IIIT in Bhagalpur. The students shouldn’t feel any difference between IIIT and IIT, he says.

Jairam Ramesh, Chief Whip, INC, Rajya Sabha gives the seven reasons for the decision of boycotting rest of the Monsoon session of Rajya Sabha by Congress and like-minded parties:

Kamakhya Prasad Tasa of BJP speaking on the Bill says information technology will gain more importance in the post-COVID world. He says the Bill gives an impetus to education and employment in the northeast region and supports the Bill.

A. Vijayakumar of AIADMK, supporting the Bill, hopes that the Bill will help IIITs of the country improve their global rankings.

He suggests establishment of a centre at IIIT Bhubaneswar to research on COVID-19. JDU MP Ram Chandra Prasad Singh says the suspended MPs shouldn’t be forgiven because the intention behind their actions was wrong.

Leader of the House Thaawarchand Gehlot says the Chair’s decision was appropriate.

The Chairman says Deputy Chairman wrote a letter to him expressing his commitment to democracy and that he wants to observe a fast.

“This is a Gandhian way, this is the JP way. We shouldn’t try to score political points,” the Chairman says. “The images appearing on TV, is unbecoming of the House of the elders,” he says.

“Despite everything, Harivansh ji made tea at home and brought it for the protesting MPs,” Mr. Naidus says.

The Chairman appeals to all to follow the rules of the House.

Former PM HD Deve Gowda tells the Chairman, government and Opposition should sit together to help you run the House. “We have not come here for tamasha,” he says.

Pralhad Joshy, Parliamentary Affairs Minister says, many leaders have asked him to finish the proceedings of the House quickly, owing to the pandemic, in response to Mr. Azad’s comments about members not being given enough time to speak. He says, he told them that would depend on the time taken for the discussion of Bills.

“The government is not hellbent upon keeping the suspended MPs out of the House,” he says. “If they express regret, the government will look into it.” 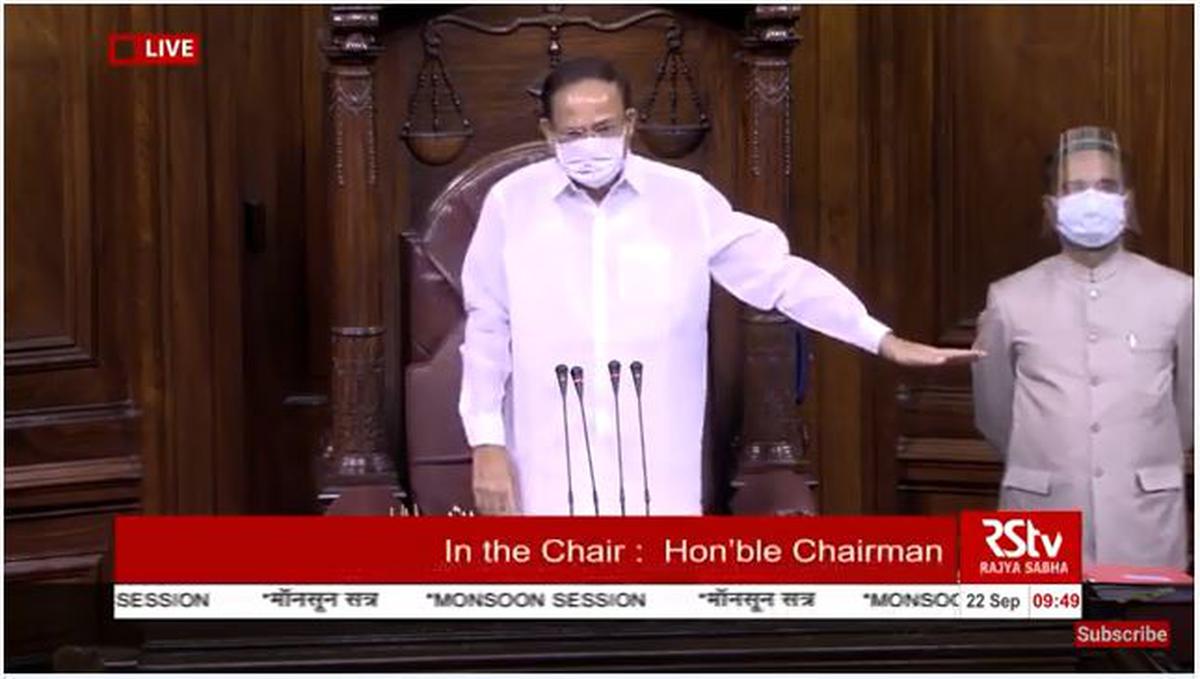 Chairman Venkaiah Naidu in the Rajya Sabha on September 22, 2020.

Many times in the past, Bills have been passed in din without division. It is not a healthy thing, but it has happened before, the Chairman says.

He says, all eight MPs who have been suspended have justified their conduct and confirmed what they did in an interview to the Indian Express today.

“Don’t try to put the blame on the Chair. The Deputy Chairman handled the situation in a very deft manner.”

“We are also pained. We are also human beings. Whatever is happening has an impact on our health,” Mr. Naidu says.

“I have asked the secretary general to get in touch with the Lok Sabha secretariat to take care of the protesting MPs,” the Chairman says.

The Opposition begins sloganeering in the House.

Ram Gopal Yadav of Samajwadi Party says there has been a mistake by the Opposition. He apologises on behalf of the suspended MPs, asks for their suspension to be taken back.

Chairman says the chair has been dragged into the matter. He says Bills have been passed in din and members have been suspended before. The rules clearly state that it should have been a no-confidence resolution and not a motion, he says, on Opposition’s motion against Deputy Chairman Harivansh.

Leader of Opposition Ghulam Nabi Azad says no one is happy with what transpired in the House over the past two days. “We fight for each minute in the House like it’s a fight at the border. If we go beyond time restrictions, things will be de-escalated 90%,” Mr. Azad says.

“There were 18 parties on one side and NDA on one side. I don’t know if the government had the numbers or not,” he says, on the farm Bills.

He recalls that Arun Jaitley, in 2016, said that the government becomes illegitimate if division of votes is denied. Mr. Azad says that the stature of the Leader of Opposition has been downgraded. “There would be no time constraints put on the LoP. We could speak freely,” he says.

“The MSP announced yesterday should have been done before. Today, the government has issued an advertisement saying ‘one nation, one market’. Don’t go towards one nation, one party,” the Leader of Opposition says. He also says Government should bring a new Bill to make MSP mandatory on private companies.

We will boycott the session till the government takes back the decision, he says and the House erupts in slogans.

AIADMK MP A. Vijaykumar raises demand for resumption of a Tamil service in the Delhi office of All India Radio.

Leishemba Sanajaoba of BJP asks government to accord classical language status to Manipuri. Mr. Naidu asks him the correct pronunciation of his name.

Chairman asks Jairam Ramesh to check if MPs in the Opposition are sitting at the required distance and following COVID-19 protocol.

Mr. Naidu takes a dig at the Treasury Bench. He says not many members this side, so physical distancing is not an issue this side.

Chairman M. Venkaiah Naidu tells members not to think that he isn’t paying attention to them since he is unable to look at members while they speak because he has pain in his neck.

Mallikarjun Kharge of Congress says unemployment has increased and the government is not filling the 20 lakh posts vacant in govt, public sector, health, education, police. He says there should be emergency recruitment.

Papers being laid on the table by MoS Parliamentary Affairs V Muraleedharan on behalf of other Ministers.

Report of committee on welfare of ST and SC laid on table.

Ashok Bajpai of the BJP raises matter of ineffective seeds, insecticides and pesticides sold to farmers, demands that the companies be penalised.

K. Vanlalvena of MNF raises matter of frequent earthquakes in Mizoram, asks Earth Sciences Ministry to send an investigation team to the State. 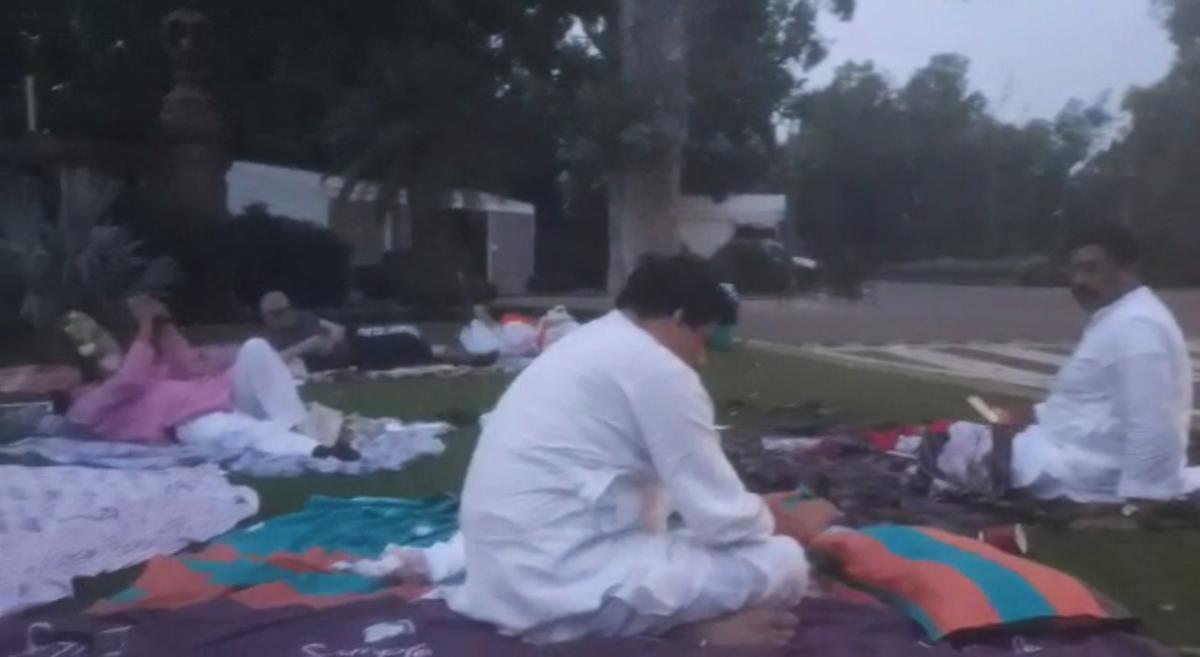 A video grab of the sit-in protest site where eight Rajya Sabha MPs suspended by the House on Monday are protesting on the morning of September 22, 2020.

The Eight Opposition Rajya Sabha MPs, who were suspended by the House on Monday, sat through the night in an indefinite sit-in protest within Parliament, even as the 15 non-NDA parties appealed to the President not to give assent to the two farm Bills passed in the Upper House on Sunday.

Bills for consideration and Passing

The Taxation and Other Laws (Relaxation and Amendment of Certain Provisions) Bill, 2020

Bills for consideration and passing